Xalapa, the host city of the 2013 FIBA Americas Championship for Women, is a Mexican city and the capital of the state of Veracruz, whereby it is also referred to the entire municipality. With a population of 387,879 and 413,136, if we count the surrounding municipality, Xalapa is the second largest city in Veracruz, after the city that carries the name of the state (city of Veracruz).

The official name of the city is actually Xalapa-Enriquez, and it can also be written as Jalapa. The meaning of the word Xalapa entails some descriptive features of the city, i.e. it means spring in the sand, from Nahuatl origin where xalap means sand and apan is a water place. If you do not know how to pronounce Xalapa, you have two options; you can actually pronounce it with an x or opt for the Spanish variant of the voiceless h. The Nahuatl used to pronounce it like sh in shoes in the 16th century, but that pronunciation is outdated.

The city was named after a Mexican governor from the 19th century Juan de la Luz Enriquez who was accredited for the city’s development by adopting numerous agendas which spurred prosperity and development. He also advocated for establishing important universities and schools. The city is also known as the City of Flowers, which can be traced back to the Spanish colonists and their belief that Florecita was born in Xalapa. Still, the connotation city of flowers is more associated with the famous German explorer and naturalist Alexander from Humbolt who spent a lot of time in Latin America exploring the Mexican sites and cities and providing the first scientific descriptions of it.

A Short Overview of The History of Xalapa 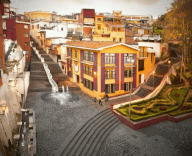 The first people to settle in the territory of today’s Xalapa were Totonacas in the 14th century when four tribes built four villages which eventually grew to become one bigger settlement known today as Xalapa. In the 15th century, the territory was invaded by the Aztecs which remained the ruling force until the arrival of the Spaniards. Xalapa was also a part of the establishment of New Espana, the term describing the settlement of Spanish colonists in the new world, mostly on the former Aztec territory. When the colonization started, Xalapa was almost depopulated, but with the influx of Spaniards, the demographic figures changed.

The Xalapa region took advantage of its position and the colonial era in the 1720's when it started to trade with the colonists from nearby territories, exchanging goods and services. By the end of the 1700s, the town inhabitants sent out a request to the King of Spain to grant Xalapa the status of a town, which he did.

Other significant events are tied to Xalapa, like sending the first balloon in the air in the 18th century, which took place in Xalapa. Xalapa, as a town, was a great supporter of Mexican independence and it fiercely advocated the idea of independence in the Mexican government. As things started to enroll in Mexico’s favor, and just before the declaration of independence, Xalapa was attacked to drive out the Spanish ruler from the city. Several months later, in 1723, Mexico gained its independence, and the people of Xalapa were looking forward to a bright future without the chains of colonization.

With the new set up, the new government adopted new legislation in the State of Veracruz and named Xalapa the capital in 1824, and only a few years later, Xalapa was upgraded from town to city.

The American-Mexican War and Xalapa

One of the most significant historical events, not only for Xalapa but entire Mexico, was for sure, the American-Mexican war from 1846-1848 which broke out when the USA declared the annexation of Texas, a territory equally desired by Mexico, moreover, it was a part of Mexico, but the Texans had protested the Mexican government few years before and acted as an autonomous region. One of the significant battles took place in 1847 near Xalapa, where the Mexicans suffered dozens of thousands of casualties and were defeated. When Americans entered the city, they were smitten with the beauty of the city describing it as one of the most beautiful cities they have ever seen. The war ended with a peace treaty, and Mexico recognized Texas as a part of the USA, and the American invaders left the occupied Mexican states and cities.

In the 19th century, with the onrush of industrialization, Xalapa got a railroad which further strengthened its ties with other Mexican cities and trade. Xalapa was also hit by a serious earthquake in 1920 which destroyed some of its most distinct buildings.

One of the significant events of the 20th century was the establishment of the Veracruz University, which remained one of the most renowned Mexican universities until today. With time, Xalapa evolved into a developed city with all the features of a modern city by offering a wide variety of activities.

The performance of Fandango, a dance of Spanish roots, is also a great part of the Mexican and Xapala tradition, and it is often incorporated in the street performances especially on big days and commemoration days. The Fandango can either be danced or sung, and in Xalapa, the dance represents an invitation to all people join to sing and dance together in a community setting.

We can see that Xalapa is a true cultural center where the modern mixes with the traditional, and where the buildings, like the Xalapa Cathedral, tell their own stories. The Xalapa people seem to stay true to their origins, which they are proud of, as well as of living In one of the most beautiful Mexican cities where many historic events took place. The city is also known for hosting sports events, especially after it hosted the FIBA Americas Championship for Women in 2013.